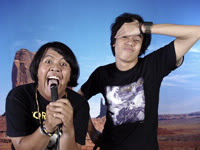 Attended the exhibit Phil Collins: the world won’t listen today, a video trilogy at the Dallas Museum of Art. This particular exhibit was very humorous and fun as it depicted young people singing to Karaoke. It literally was like going to the bar and hearing people sing karaoke. I may never look at The Smiths like that again! It was great to see how people today no matter how silly they look up there still have the balls to go up there and sing. Some think they are actually good at it too, which of course makes it even more exciting!

“Collins spent extended periods of time researching, lecturing, building sets, and filming, with the filming followed by an intensive and extensive editing period. He went on television and radio, visited dance clubs, and posted flyers throughout each city, inviting participants to come and perform their favorite songs from The World Won’t Listen.”